Given that two players are playing a game optimally (playing to win), MiniMax algorithm tells you what is the best move that a player should pick at any state of the game. So, the input to MiniMax algorithm would be –

And the output would be the best move that can be played by the player given in the input.

In the game of Tic-Tac-Toe, there are two players, player X and player O. Now imagine there’s a scoreboard which displays a huge number called “score”, and –

To understand this better, imagine you are player X and this is the current state of your game – 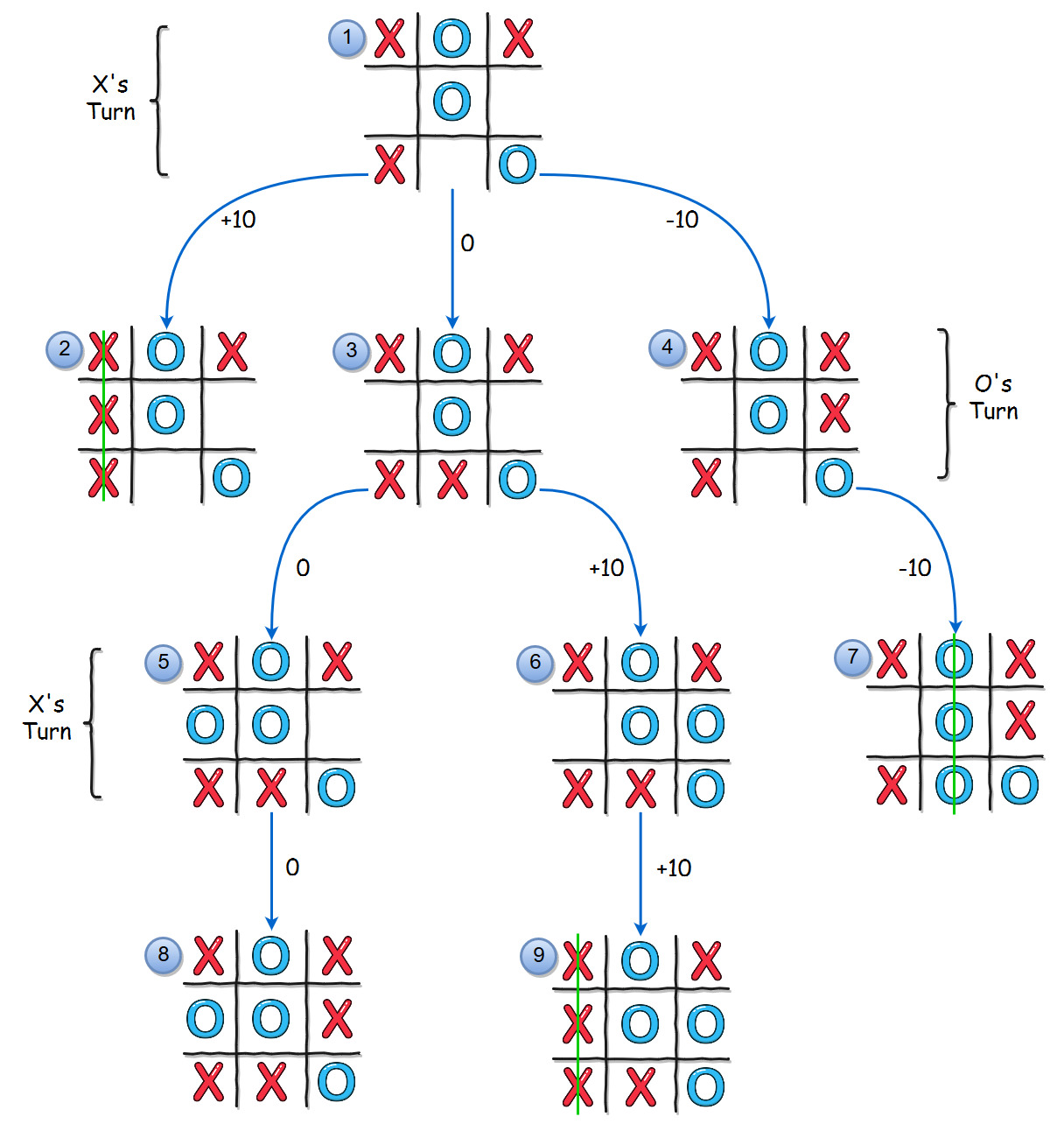 So if you are in state 1 (from the above diagram), you have 3 possible moves which lead to state 2, 3 and 4. For these moves the scores are –

Now, to make sure you understand both sides of this algorithm. Let us take the same state as above and let us say it is O’s turn now and not X’s. Can you draw a state diagram which will depict all the possible moves and the scores which will be returned by playing them? You can! Just pause here for a moment and try to draw the state diagram for the above game, assuming it is player O’s move. 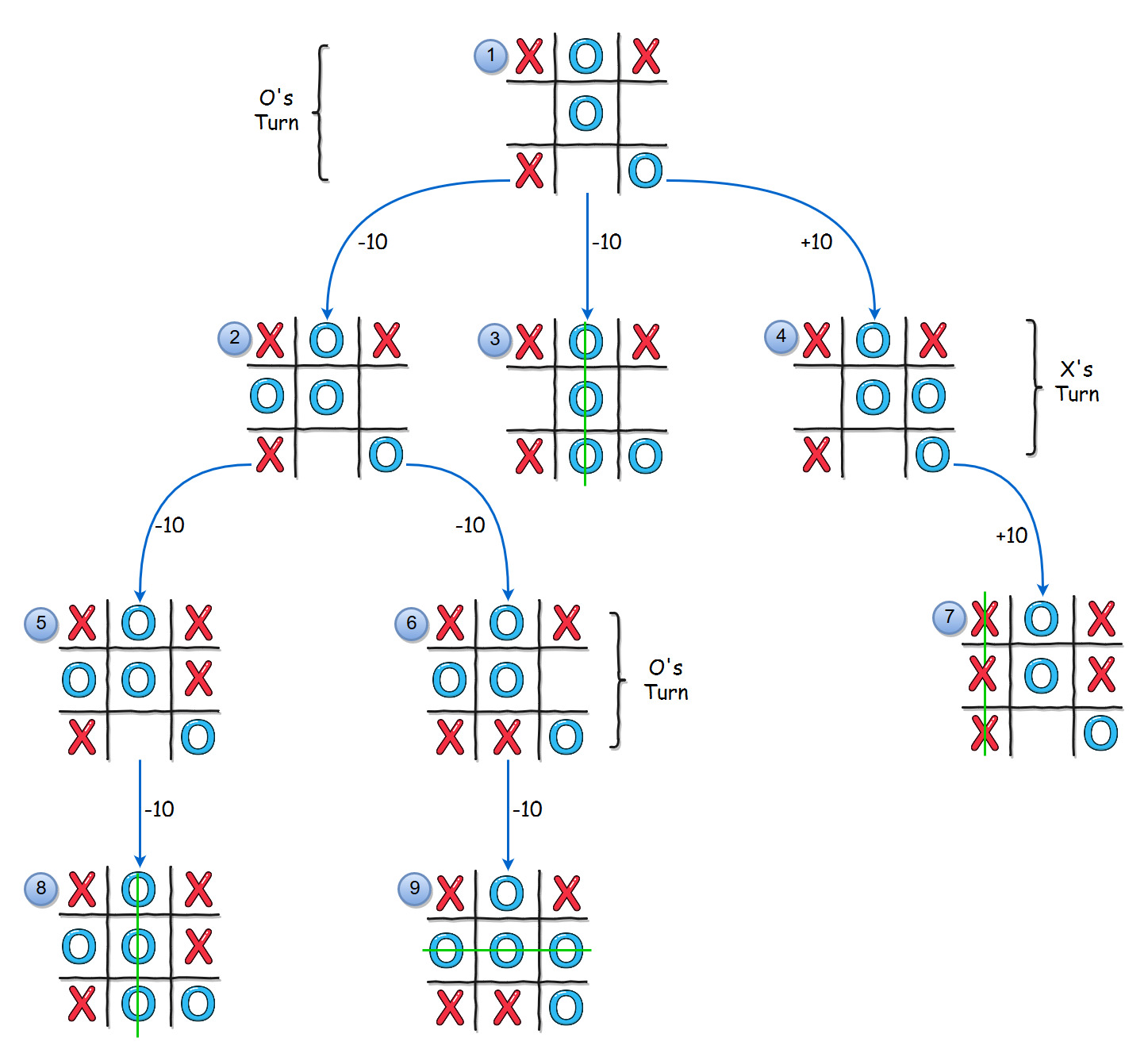 Did you get a diagram like this? Good job if you did 😉 . Player O has 3 possible moves and the scores are –

Player O will always try to minimize the score, so player O must select a move which will either lead to state 2 or 3 to win.

Writing code for MiniMax algorithm is not very difficult, but you may not get it in the first try so I’ll help you out. Firstly, have a clarity on the smaller pieces of logic and write methods for them first. You will need these 3 helper methods for your code –

So now you have a little clarity over the smaller pieces, code them first. Now, you are ready to write the MiniMax algorithm method. It is a recursive method which takes in 2 inputs –

It will need to return –

We can make a new class to return all the information we need. So, our MiniMax algorithm will look like –

Ideal player doesn’t give up!

There’s just one thing lacking in our algorithm now. Take the case given below – 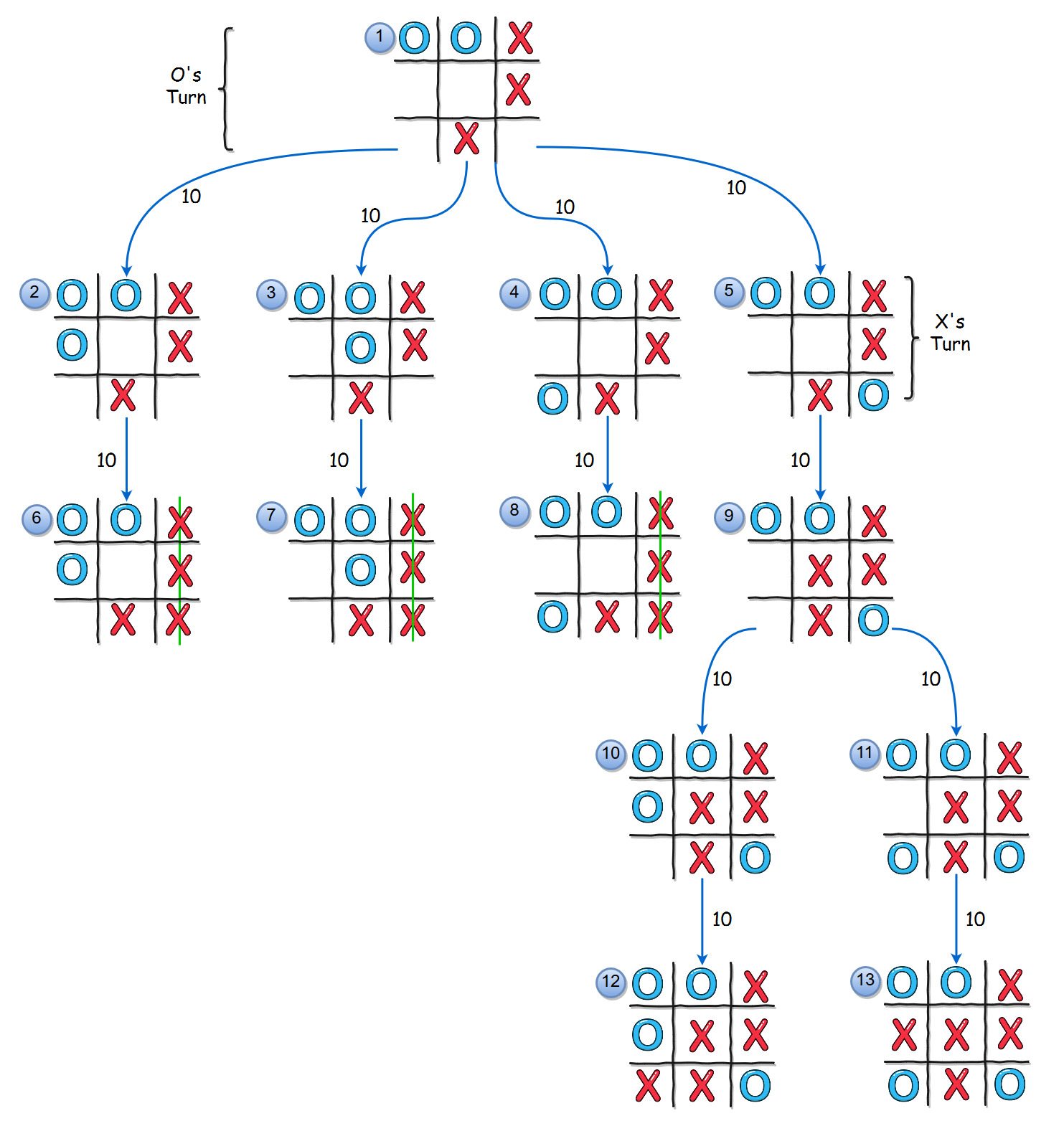 So for the above case, player O will lose no matter the decision taken. If you think about this, if we apply the Minimax algorithm we formed so far, in this case Player O would choose state 2. This is because state 2 is the first state it programmatically encounters while computing the minimum value.

If we apply this “decay score by level” logic to the above example, the case would look like this –

Now our player O will obviously choose state 5. Now our TicTacToe bot is an ideal bot! The pseudo-code now would look something like this –

Try to implement the ideal TicTacToe bot on your won, it will be fun to create a game. If you get stuck, you can refer to my code –

One thought on “MiniMax Algorithm”